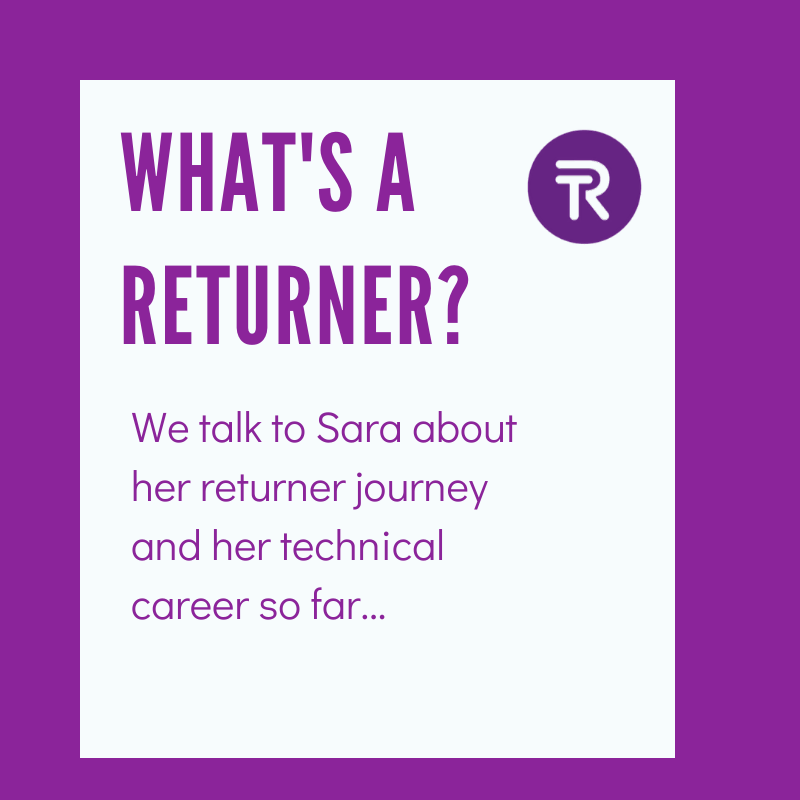 returners are a unique type of employee which companies should learn to appreciate. a returner never makes the decision to switch careers lightly, and successfully retraining to be employable in a matter of months is a huge achievement

In our 'What's a Returner' series we're addressing common misconceptions around returner talent and sharing the stories of real life returners who have been through our programme and now work in industry.

We know from conversations with businesses that there is a lack of understanding about just 'who a returner is' and the value they bring to a business. Here Sara, graduate of Tech Returners Cohort 4 shares her story.

Tell us a bit about your previous experience and why you decided to make a career change into tech.

Before making a career change into tech, I was involved in music production and audio engineering on a freelance basis, both here in Manchester and previously in my home country Italy. Even though I I loved the work, I found it difficult to financially rely solely on my business and decided after a number of years to change field and try a new career. Tech had always been a great interest of mine from a very early age (my first computer was a Compaq which only ran on DOS and spent most of my free time in front of it!), which was put on the back burner when deciding what degree to pursue at University (I graduated in Music Technology in 2012). I knew in my heart that tech was something I could always go back to since my passion for it had never died out, and when in January of last year I had to make a choice regarding my future and my career, I decided to pick up the courage to retrain and follow that passion. We often meet with misconceptions about returners.

Having been through the Your Journey Into Tech programme, what would you say to businesses about returners?

I would say that returners are a unique type of employee which companies should learn to appreciate and gain great advantages from. A returner never makes the decision to switch careers lightly, and successfully retraining themselves to be employable in a matter of months is a huge achievement and a testament to determination and passion for the new field that they wish to enter. And even though they might be considered an entry-level employee in their technical field, they are probably an experienced working individual. They have probably already worked as part of a team, worked under pressure and carried out responsibilities in their previous working experience, which makes them already advanced in other aspects of their new job.

I am now a Developer in the App Development team at ANS Group in Manchester.

How did you find the transition from the course curriculum into production ready software delivery?

Upon joining ANS, I was immediately assigned to an ongoing project and instructed to mainly work on bugs and issues. The codebase used a range of technologies that I was familiar with, but was a lot more complex than anything that I had ever worked on previously! In the first few months, I felt I needed to learn as much as possible to become a proficient developer within the team: working on loads of bugs and asking senior developers for help and guidance helped me consolidate my skills in a relatively short time.

What technologies/languages/tech stack are you working with?

My team currently prefers React on the frontend and NestJS on the backend. We have recently started incorporating GraphQL in our architecture, and we all really enjoyed using very modern technology in our ongoing projects.

What development processes or practices do you utilise as a team and how are you finding them?

We have a daily stand-up meeting first in the morning, where each member of our team goes through the current task they are working on and whether they need extra support. We structure our development workload in 2-week sprint blocks: at the beginning of each sprint, we have a sprint planning session, during which we breakdown features into single tasks (or tickets) and we estimate points/time needed to complete the work. It has been really interesting to learn those practices as part of a development team, and can really see the benefit of adopting agile techniques to quickly adapt to changes and break down the workload into easily manageable chunks.